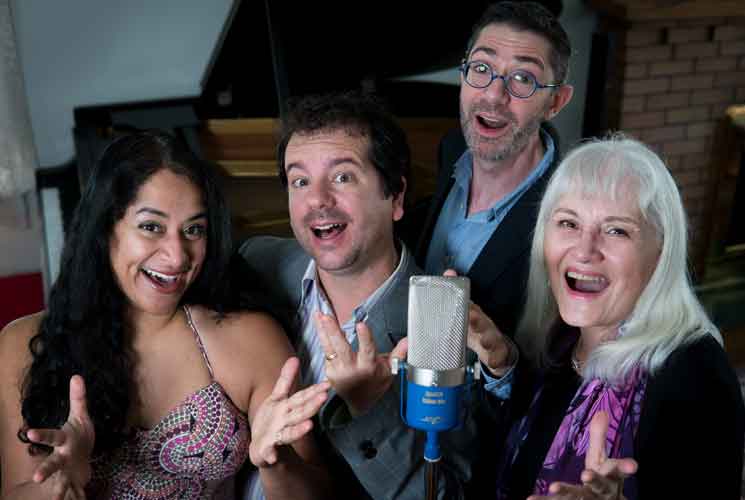 Canadian-based, professional, a cappella, close-harmony jazz quartet Hampton Avenue dazzles with their unique timbre, impeccable musicianship and jazz chops to boot. From fresh originals to cool standards, they’ve been compared to such vocal giants as The New York Voices and Singers Unlimited. Using nothing but their voices and innovative live-looping techniques, genre-bending FreePlay takes you from the concert halls of Europe, to the jazz clubs of Manhattan, to the temples of India, and back to their native Toronto, Canada… all without leaving your seat. From Bach to Bird to the Beatles, Dylan and Suba effortlessly cross musical boundaries, continually combining and recombining sounds to create a concert of endless variety, with the intimate delivery of two people. Imagine Simon and Garfunkel crossed with a Bach 2-part invention… or an acrobatic jazz melody combined with ancient Indian beats… or an 8-part vocal arrangement created by two singers… and you’ll get a glimpse of what FreePlay has to offer.

Award-winning Dylan Bell and Suba Sankaran are international leaders in the a cappella world, having worked with legends such as the Swingles, the Nylons, and the New York Voices. They have performed in over 20 countries across 6 continents, and they are the co-artistic directors of SING! The Toronto Vocal Arts Festival, the only a cappella festival in Canada.

Dylan and Suba first met in Toronto in 1993, singing in a jazz choir at York University called “Wibijazz’n’”: soon after, they started directing the choir together. At their year-end concert, Dylan and Suba performed an a cappella “director’s duet”, and FreePlay was born. What started as a typical voice-and-piano jazz duo began to evolve: more instruments were added, and more musical styles explored, to create a duo unique in its musical depth and variety. In 2007, FreePlay created the uniquely innovative, all-a cappella live looping performance style that has earned them international recognition. The Ault Sisters apply their close vocal harmonies to their original songs as well as jazz standards that have been reimagined to provide a contemporary flair and fresh appeal. On disc and in performance, different sisters take the lead on different tracks, adding to the vocal variety, while their intricately interwoven harmonies are a signature part of their performances. They are equally at home singing a cappella or with a band.
​
Their latest album, “Sisters In Song”, pays homage to the great sister acts who inspired them, such as the Andrews Sisters, McGuire Sisters and Pointer Sisters. “Sisters In Song” reached #1 album on the Canadian iTunes jazz chart in 2018 and is currently distributed worldwide through Believe.

The Ault Sisters have performed at theatres in Canada such as The Jane Mallett Theatre, Koerner Hall and the Living Arts Centre, and at clubs such as the Jazz Bistro, Hugh’s Room Live, The Jazz Room, and Lula Lounge. They have also performed at many festivals, such as The Beaches International Jazz Festival, The Barrie Jazz and Blues Festival, and the Brantford International Jazz Festival concert series. 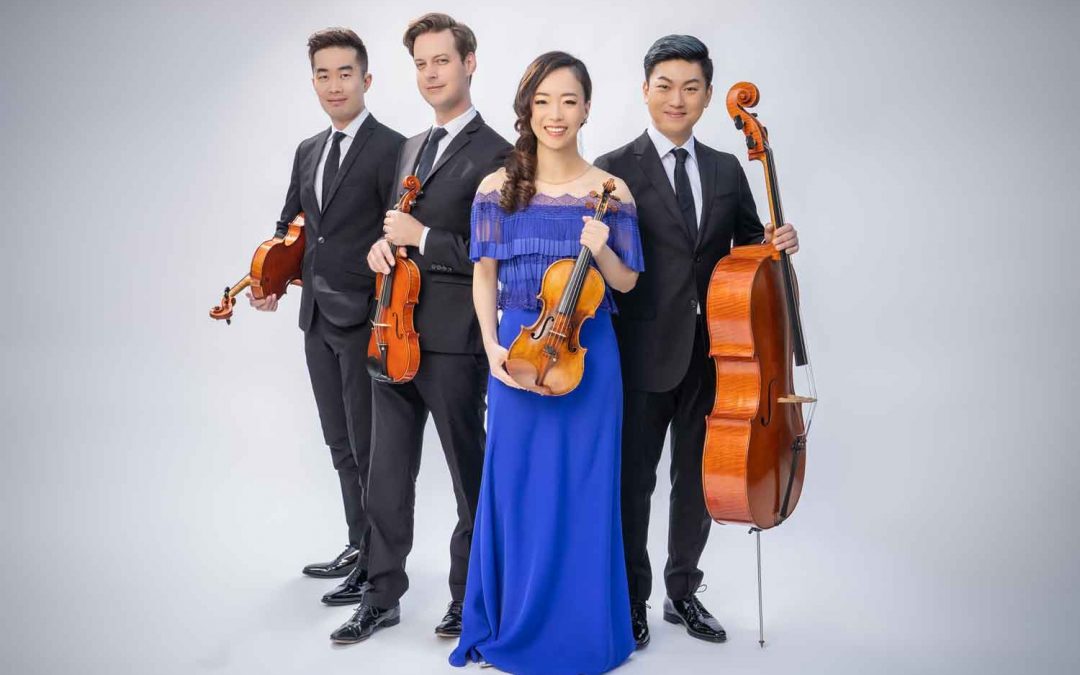 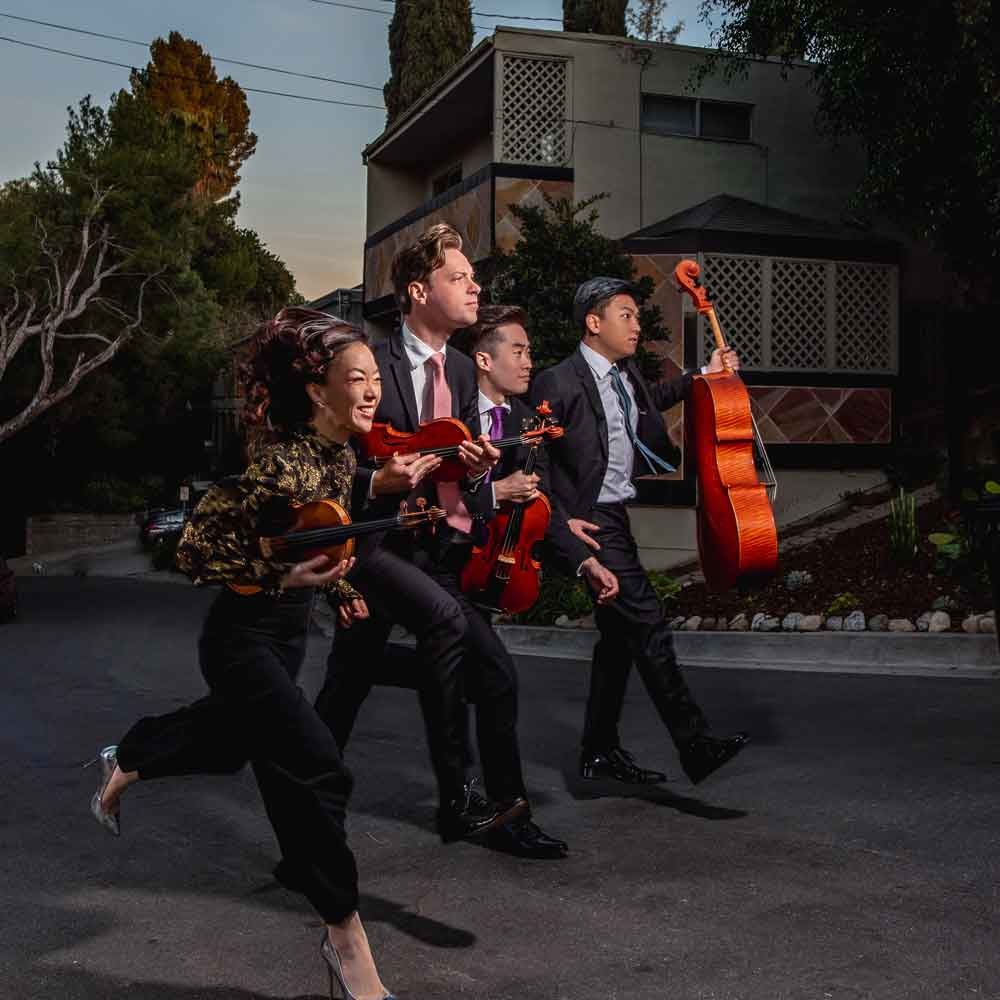 With their debut recording, “Souvenirs” recently named BBC Music Magazine ‘recording of the year’, Canada’s Rolston String Quartet continues to receive acclamation and recognition for their musical excellence. As the 2018 recipient and first international ensemble chosen for the prestigious Cleveland Quartet Award from Chamber Music America, their accolades and awards precede them. In 2016, a monumental year, they won First Prize at the 12th Banff International String Quartet Competition, Grand Prize at the 31st Chamber Music Yellow Springs Competition, and Astral’s National Auditions.

Recent highlights include debut performances at Carnegie Hall, Wigmore Hall, The Freer Gallery, and Chamber Music Houston, two major Canadian tours under the Prairie Debut and Debut Atlantic touring networks, and three European tours with dates in Leipzig, Berlin, Lucerne, Heidelberg, Barcelona, and Graz among others. Their 2019-20 season includes concerts at UCLA’s Herb Alpert School of Music, Texas Performing Arts, Chamber Music Northwest, and Calgary Pro Musica; the chamber music societies of Detroit, Fort Worth, Kansas City, Philadelphia, and Vancouver; and the Louvre Museum. As Süddeutsche Zeitung states, “they showed such delicacy, slender elasticity, impeccable intonation, and such eminent sense of tonal balance…This is a new bright star on the truly not empty string quartet sky of our day.”

Notable collaborations include performances with renowned artists Janina Fialkowska, Gary Hoffman, Nobuko Imai, Miguel da Silva, and David Shifrin, as well as the St. Lawrence, and Dover Quartets. The quartet are associated artists at the Queen Elizabeth Music Chapel, and completed a two-year term as the Yale School of Music’s fellowship quartet-in-residence in spring 2019. Previously, they were the graduate quartet-in-residence at Rice University’s Shepherd School of Music. Keeping in the teaching tradition, they have taught at the Yale School of Music, University of Toronto, and the Bowdoin International Music Festival among others. Primary mentors include the Brentano Quartet, James Dunham, Norman Fischer, and Kenneth Goldsmith, and the quartet has received additional guidance from the St. Lawrence String Quartet, Miguel da Silva, and Alastair Tait. 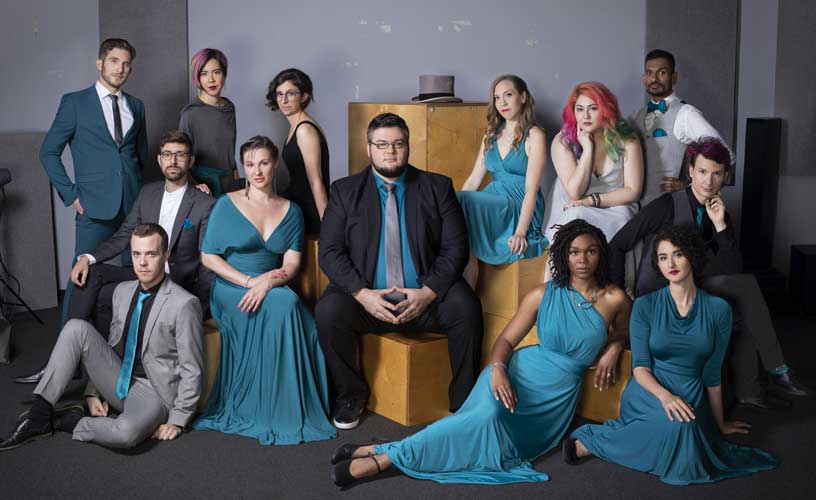 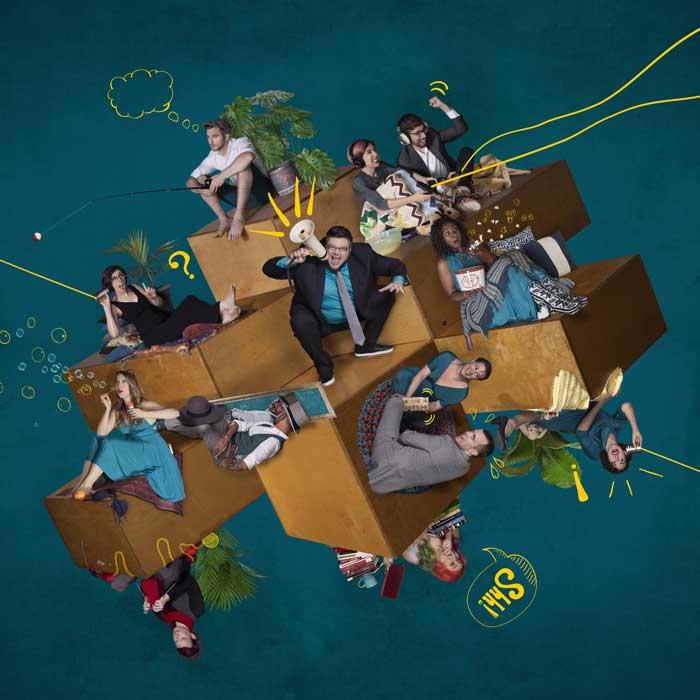 Since forming in 2010, Countermeasure, has been earning standing ovations and critical acclaim worldwide. Led by award-winning composer/arranger Aaron Jensen, the group has shared stages with a cappella giants including Naturally 7 and The Swingle Singers and top 40 stars like Corey Hart and Blue Rodeo.
Countermeasure features 12 of Canada’s top vocal talents, performing innovative arrangements of pop favourites, classic jazz standards, and original songs. Their diverse songbook has equipped the group to headline international choral concerts, play the main stage at jazz festivals, entice club-goers onto the dance floor. Incorporating innovative live looping, instrument imitation, and vocal percussion, Countermeasure enthralls their audiences worldwide with their dramatically choreographed shows and flawless harmonies. They have won multiple awards from Contemporary A Cappella Society of America, include Best CAL Album, best video, and for songwriting. When they’re not jumping onto countertops for flashmobs, or providing the live soundtrack to National Film Board shorts, Countermeasure can be seen at high-profile jazz festivals, concert series, and galas, as well as on CBC Radio and TV, Global Television, Rogers Television, City TV, and CP24. They are a founding artist of SING! The Toronto Vocal Arts Festival, Canada’s premier a cappella festival. They have wowed audiences on two U.S. and several Canadian tours, and in the UK at London a Cappella Festival, Edinburgh Festival Fringe, London-area theatres,
and Kennedy Center in Washington, DC.. They performed for an audience of 1000 at the opening concert at the world-renowned Vocalmente Festival in Italy and are returning to Japan, having sold out their previous tour.

Thank you to LivingSpaces & LifeStyles Magazine and Windrush Estate Winery for mentioning our memorable performance with Ben Heppner and Daniel Vnukowski earlier this year. It was a remarkable occasion that combined breathtaking scenery with a emotionally-charged plot by Alfred Lord Tennyson.

Posted on Aug 30, 2022 in Food/Recipes, Lifestyles Never a hero in your own country, so goes the old adage! It is very interesting that Ontario wines are world-class, but a lot of people simply find this hard to believe. How can this happen? A case in point is Windrush Estate Winery in the Hockley V...
View on Facebook
·Share

CARP stands for Canadian Association of Retired Persons. It is a national advocacy organization that serves the needs of Canadians age 50 and over.