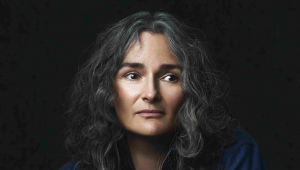 Vera Pavlova was born in Moscow in 1963. She studied at the Schnittke Academy of Music, sang in a church choir, majored in the history of music, and three years later launched her literary career with revealing poems that confronted many readers with repressed memories, concealed experiences and latent longings. Her esteemed career began in the most unlikely of places: a maternity ward:

My first poem was a note I had written to send home from the maternity ward. I was twenty at the time, and had just given birth to Natasha, my first daughter. That was the kind of a happy experience I had never known before or after. The happiness was so unbearable that for the first time in my life I wrote a poem. I have been writing since, and I resort to writing whenever I feel unbearably happy or unbearably miserable. And since life provides me with experiences of both kinds, and with plenty of them, I have been writing for the past twenty-six years practically without a pause. I cannot afford staying away from writing. It could be called an addiction, but I prefer to describe it as my form of metabolism.

Her poems are written in rhyming Russian, contain an intimate tone and were translated into English by her late husband and translator, Steven Seymour. Due to the nature of Russian grammatical endings, many words rhyme with each other and allow poets wide avenues for poetic expression. This freedom in word choice and the richness of the Russian language enables Pavlova to explore her many topics with the depth and breadth she does. Her works have been published in The New York Times and The New Yorker and have been plastered in the New York City and Los Angeles public transportation systems. Her poetry has been published in twenty languages in the span of twenty years.