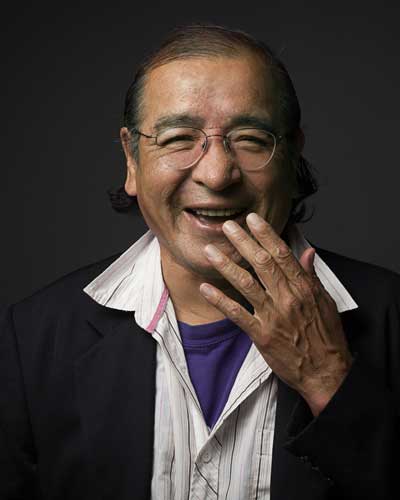 Tomson Highway, award-winning playwright and the author of The Rez Sisters, Dry Lips Oughta Move to Kapuskasing, Rose, and Kiss of the Fur Queen, was born in a tent near Maria Lake, Manitoba in 1951. A full-blood Cree, he is a registered member of the Barren Lands First Nation, the village for which is called Brochet. He grew up in the spectacularly beautiful natural landscape that is Canada’s sub-Arctic, an un-peopled region of hundreds of lakes, endless forests of spruce and pine, and great herds of caribou. His parents, with no access to books, TV or radio, would tell their children stories, and Tomson fell in love with the oral tradition of storytelling. When he was six, he was taken from his family and placed in residential school in The Pas. Although he resented being taken away from his parent and family, he did learn music, and had plans to become a concert pianist. He traveled to London to study, and earned his music degree in 1975 and a Bachelor’s of Arts in 1976 from the University of Western Ontario. But instead of becoming a professional concert musician, Highway instead decided to dedicate his life to the service of his people.

Subsequently, for seven years, he immersed himself in the field of Native social work, working on reserves and in urban centres across Ontario and, later on, Canada. He then decided it was time to put all this extraordinary artistic training and this extraordinary Native social work experience together – he started writing music, plays, and, later, novels. After years of working in the Toronto theatre industry, he achieved national and international recognition in 1986 with his sixth play, the multi-award-winning The Rez Sisters.

He was made a member of the Order of Canada in 1994. For many years, he ran Canada’s premiere Native Theatre Company, Native Earth Performing Arts, in Toronto, out of which has emerged a generation of professional Native Theatre artists. He now splits his time between homes near Sudbury, Ontario and Gatineau, Québec.