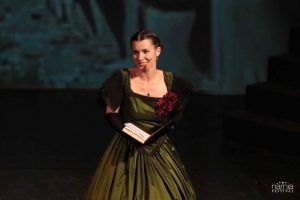 Moscow and Rome-based soprano Natalia Pavlova (who is a descendant of Russian national poet Alexander Pushkin) has graced the stages of Carnegie Hall, Moscow Chaikovsky State Conservatory, Auditorium Parco della Musica (Rome), and many others throughout the world.Active in performing music from antiquity to today, she was a soloist for 6 years in the Moscow theater School of Dramatic Art, directed by Anatoly Vasiliev. Natalia has sung world premiere performances and recordings of works by composers Giovanni Sollima, Venus Rey and Iraida Yusupova, composed specially for her voice, as well as pieces by Vladimir Martynov. She serves on Artistic Council of The First Cultural International Festival, Russian-Rome, Palazzo Poli in Rome, and was recently awarded the Silver Lion at the Narnia International Festival, as well as the International “Clean Sound” Award.

She has recorded 3 CD with contemporary music of Rey Jr and Yusupova in Da Vinci Classics and in Art Classics.