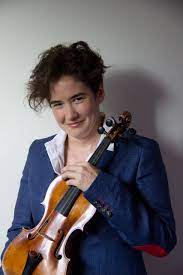 Hailed as “one of Toronto’s most gifted, and searching, young musicians” (Globe & Mail), Kathleen Kajioka has established a reputation as a musical multi-linguist — from the Classical music establishment to the World music scene, from Early Music to New Music to Pop, Kathleen moves between worlds with agility and uncompromising depth.

Since completing her studies on viola at the Eastman School of Music, she has performed in concert series and festivals across Canada, from the Halifax Jazz Festival to the Victoria Summer Chamber Music Festival, and internationally in the US and Europe. Kathleen has been heard frequently on CBC Radio as both soloist and chamber musician.

As a baroque violinist and violist, she appears regularly with Tafelmusik, Scaramella and Toronto Masque Theatre. She also performs with the Texas Early Music Project, and with the Montreal-based ensembles Masques and Arion Baroque.

She teaches Early Music at the Royal Conservatory of Music’s Glenn Gould School, and brings all her musical experiences to bear in her role as broadcaster at The New Classical 96.3FM in Toronto, where she is the weekly host of “In the Still of the Night” and “Dinner Classics.”