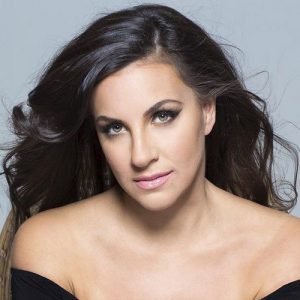 The Lebanese-Canadian soprano has earned worldwide acclaim in a highly varied repertoire. In Great Britain she has starred as Violetta/La traviata at Glyndebourne Festival Opera and the Royal Opera House, Covent Garden (where she has also been heard as Musetta/La bohème and Sylvia/Donizetti’s L’ange de Nisida) and as Elisabetta/Roberto Devereux at Welsh National Opera. Among her successes elsewhere in Europe are the title role/Rusalka (Amsterdam), Musetta (Madrid), Imogene/Il pirata (Bordeaux), and concerts with Elina Garanča (Austria) and Juan Diego Flórez (Spain). Appearances in North America include a triumph in the title role/Maria Stuarda (Seattle Opera), as well as Tatyana/Eugene Onegin (Canadian Opera Company), Liù/Turandot (Canadian Opera Company, Opera Philadelphia), Salomé/Hérodiade (Washington Concert Opera), Micaëla/Carmen (Santa Fe Opera), and Tatyana Bakst/Jake Heggie’s Great Scott (San Diego Opera). The soprano’s debut solo album, “Echo,” a program of bel canto repertoire with the Hallé Orchestra, is available on the Opera Rara label, as are her performances in L’ange de Nisida and two other Donizetti rarities, Les Martyrs and Belisario. She is an alumna of the Metropolitan Opera’s Lindemann Young Artist Development Program.