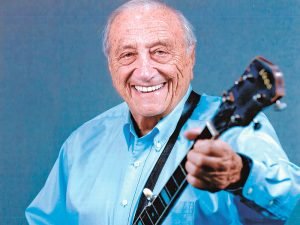 Jerry Gray is a folk legend who was born in Toronto, ON in 1933. He is a founding member of The Travellers — Canada’s legendary band of minstrels who composed and recorded the Canadian lyrics to U. S. folk singer, Woody Guthrie’s, renowned This Land Is Your Land. Their rendition caught fire north of the border and rivalled trumpeter Bobby Gimby’s pied-piperish CA-NA-DA as the theme song for the feel good celebration of this country’s 1967 centennial. He has appeared in concert together with Gordon Lightfoot, Anne Murray, Ian & Sylvia, Arlo Guthrie, Emmy Lou Harris, Theodore Bikel, Jack Benny, Rich Little and others.

The story begins when he once attended a Jewish summer camp. While being employed as the camp lifeguard, he was asked to appear on Saturday nights in the concert hall together with Fagel Freeman Gartner, accompanist for the Toronto Jewish Folk Choir. After high school at the age of 18, he joined several older camp staff members to form the UJPO (United Jewish People’s Order) Folk song group and toured across the country for 3 weeks by train.

The following year in 1953, Pete Seeger visited the summer camp and co-founded Canada’s first folk song group – The Travellers. During the group’s first year, Mr. Gray taught himself how to play the banjo. The Travellers appeared for many years on CBC-TV shows to rave reviews. They recorded their first record album in 1958 with a hit single written using Canadian lyrics “This Land Is Your Land”, which followed with 17 LP recordings over the next ten years.

In 1961, the group started the Mariposa Folk Festival where they were featured performers for 3 years and returned over 20 times. The following year, they became featured performers at the first Canada Day television show in Ottawa, ON and appeared there every 10th anniversary until 2002. The same year we were asked by Canada Foreign Affairs to tour the Soviet Union for one month as the first cultural exchange with that country.

In 1964, The Travellers opened the 100th Canada Anniversary festivities by singing a command performance for the Queen and Prince Phillip in Charlottetown, PEI which led to the prince’s asking of the group to perform at the London Palladium with an accompanying tour of the United Kingdom. The same year, the group did a concert in honour of Dr. Martin Luther King together with Harry Belafonte in Toronto, ON.

In 1967, during Canada’s Centennial year, The Travellers were asked by the federal government to tour every province and territory that year, resulting in a total of 186 concerts, as well as two weeks of performances at Expo 67 and later in Osaka at Expo 70. On behalf of the government, the group performed in Poland, Germany, Panama, Cyprus, USA, while entertaining Canadian Armed Forces and peacekeepers around the world – including one Christmas visit to a Canadian prison in Kingston, ON. For the next 30 years, The Travellers did concert programs throughout the globe with performances for every national trade union and convention pep rallies.

In 2000, Mr. Gray began doing concert lectures at universities throughout Canada and the United States. The Travellers were the first prize winners of an award by the Toronto Musicians Association and received awards from every major trade union culminating in a special award by the AFL/CIO in 2010, the first and only Canadian entry for their Joe Hill award.

In 2011, Mr. Gray was asked to conduct the Mormon Tabernacle Choir in a Toronto concert in a performance of the Canadian version of “This Land Is Your Land”, written by himself and The Travellers. In 2019, he received a lifetime award from the Mariposa Folk Festival.

Locally, Mr. Gray built a winter chalet and joined Alpine Ski Club in Collingwood and performed concerts at local area schools hosted by John Kirby, among others. He also lived as a full-time resident in Craigleith, ON for 4 years between 2004-2008. During this time, he sang for many service clubs in the Collingwood area.