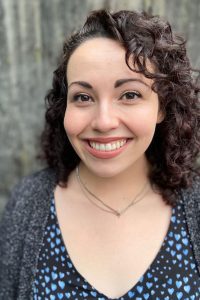 Soprano Catherine Thornsley was born and raised in Flagstaff, Arizona, where she began studying voice at the age of 16 with Dr.  Judith Cloud. She received her Bachelor of Music degree in Vocal performance from Northern Arizona University in 2015, and shortly thereafter relocated to Seattle where she began to build a career as a working professional. In 2018, Catherine was accepted into the University of British Columbia’s opera program and began studying for her Master of Music degree in Opera performance. At UBC, she has had the enormous privilege of portraying Marta in the Canadian premiere of Weinberg’s Pasazerka in January 2020. Catherine has sung internationally, recently travelling to the Czech Republic and Germany with the UBC Opera Ensemble. She also participated in the 2020 Metropolitan Opera National Council Auditions and was a recipient of the Encouragement Award for the Utah District. She has continued to stay active throughout the pandemic by participating in UBC Opera’s productions of socially distanced excerpt concerts, and two fully staged productions; Giachino Rossini’s Il Viaggio a Reims as Madame Cortese and W.A. Mozart’s Le Nozze di Figaro as Contessa Almaviva. Catherine is currently based out of Vancouver. where she is studying under the direction of Nancy Hermiston.