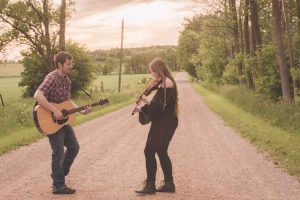 On a snowy Canadian winter night, in the heart of downtown, a crowd of musicians gathers for the Imbibe open jam. It was at the jam where these two artists, from seemingly opposite ends of the musical spectrum, found strength in each other. Claryssa from the world of classical and traditional Celtic music, and Ryan from the world of jazz/pop production, the pair began to grow and learn from each other, creating a sound full of subtly crafted diversity. This was the beginning of the folk duo A New Ground, with Claryssa on the fiddle and Ryan on the guitar. After touring their debut album Forge The Sky across Canada 2018 – 2019, A New Ground is set to release their sophomore album Connected, later this year.
Collingwood Music Festival
115 Hurontario St. Suite 200
Collingwood, ON
L9Y 2L9
office@collingwoodfestival.com